skip to main | skip to sidebar

Purpose of this Blog is to become a tool and a place where artist that collect and paint flat figures can find interesting links and news about flats, painting techniques, history and various related articles.English speaking related sites are very few but hopefully this blog will provide the collector and the painter with interesting and valuable information about the Art of the Flat Figure and everything related to it.
During the next days I will post any related info I have collected for a long time about various aspects of Flats. Techniques, photos, links, historic articles, anything that is related. Wherever possible I will including the author of the original article. I apologise if sometimes the author's name is not included. It's not intentional but it is lost through time.

Here is the finished set from Mignot depicting Napoleon and some of his Marshals and Generals with various troops holding their horses. Mignot sets are highly collectable sets since Mignot moulds have been sold to Plassenburg museum of Germany. Quality of the engraving is superb and it definately worths the trouble to find such a set.
All figures have been painted exclusively in oils over a white primer, including the various metal items. 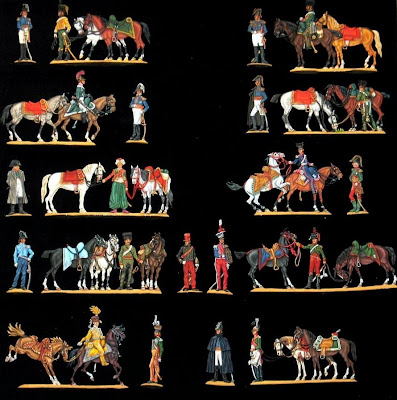